Vocalist Eirini Tornesaki (aka Erini), born and raised in Heraklion, Crete, Greece, is a versatile artist involved in Jazz, Greek folk, Latin and other World Music. Erini has performed in Canada, USA, Cuba, Colombia, UA, Cyprus, Greece and most other EU countries with artists including, Bary Manilow, James Bay, Christos Zotos, Mario Frangoulis, George Garzone among others. As a child Erini studied piano, cello, performed in a string orchestra and a choir. In 2012, she completed a Bachelor at BIMM in Brighton, England. Erini was the original singer of the Cirque Du Soleil show “Kurios”, touring for 3 years, performed on the soundtrack, DVD and Day Time Emmy Award-winning VR short film. Erini sang at Carnegie Hall in 2017. She also performs Greek Folk music with the "Pharos Ensemble" and is a member of the humanitarian project "Kalesma", that builds music educational programs for children in Greece. Erini has been awarded with a full – tuition scholarship to complete a M.M at the Berklee Global Jazz Institute in Boston. 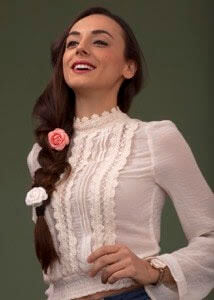